In March of 2015, I had traveled to Palm Springs, CA to celebrate my birthday. Once there, I was reading the local paper and saw an article about an exhibit of Ansel Adams work that was going to be on display at the Palm Springs Air Museum. A fan of Ansel’s work for many years, I have seen other exhibits of his photography at galleries in Washington DC and Chicago of his most famous work, his landscapes. I was excited for this one because the article stated that the photography in this exhibit was a departure from his signature style of landscape photography. The article referred to the photographs on display as “The Manzanar Collection.”  I did some internet research and for the first time learned that 72 days after the bombing of Pearl Harbor, President Roosevelt signed Executive Order 9066 which lead to the internment of 110,000 Japanese Americans into 10 “Relocation Centers” throughout the United States.

The exhibit of the Manzanar Collection was very powerful for me, to see this imagery and portraiture of people who basically were evacuated out of their homes and sent to a guarded camp surrounded by fences and barbed wire.

Now, two years later, I have moved back to the Coachella Valley and took a trip up to Death Valley with a friend. As we planned the trip, we decided we would leave around noon and head up to Lone Pine, CA, which is about a 4-5 hour drive, my friend was familiar with the route so we didnt have to map it out. As we approaching Lone Pine, I looked at a map to see what the was in the area and the words: Manzanar National Historic Site jumped out at me just north of the town of Lone Pine. I was tripped out to say the least. My travel partner and I discussed that we would  head up there in the morning before going into Death Valley National Park.

I had seen Ansel’s imagery, so I had an idea of what the place would be like or so I thought.

When we got to the entrance, I got out of the car to take some photographs and I felt an over whelming sense of sadness, an agony/pain that was so intense that I began to cry. I let the emotion flow, then shook it off and captured some imagery.

We proceeded to the Visitor’s Center and took in the whole experience. I was just kind of numb throughout it all.

We then took the “auto tour” around the 6,000 acre camp. Most of the buildings are gone, but there are still some of the fish ponds and bridges that the residents of the camp built during their internmant. We stopped by the cemetery that once held the remains of the 150 men, women and children who died during the three years they were at the camp. Interestingly enough, the cemetery was outside the barbed wire fence, so when the bodies were laid to rest, they were out side of the camp. Some of the remains were moved after the camp closed in 1945, but some remains are still there.

There is a white monolith at the cemetery that sits on top of three teirs and each tier had various momentos: trinkets, bracelets, fishing lures, coins. At the very front edge of the first tier were three US quarters placed right next to each other.  I presumed someone had left the 75 cents as a significance to the 75 years that had passed. On the front of the monolith are Japanese Kanji characters that read: “Soul Consoling Tower”

The weather was cool. It was damp. The sky, was mostly cloudy, and a fresh amount of snow in the mountains created a contrast to the Sierra Nevada that just added to somber tone of the morning.

Once in the car and headed towards Death Valley, my friend and I reflected on what we had just experienced.

75 years later and Executive Orders are being signed violating the rights of American citizens. Only currently,  we aren’t at war.

Now, I follow Uncle George (Takei) on the social media..and I am aware of his play Allegiance.

It’s disconcerting to see that fear, prejudice and a lack of compassion for our fellows still exists.

Still, I was just tripped out by it all…how over the course of a couple of years I went from having no idea of Manzanar and what it represented, to viewing the Adam’s Exhibit and then end up taking a trip that starts out with a tour of Manzanar.

I used to believe that certain things occur by happenstance.  I gave up that belief a while back. There are no coincidences.

Here are some photographs: 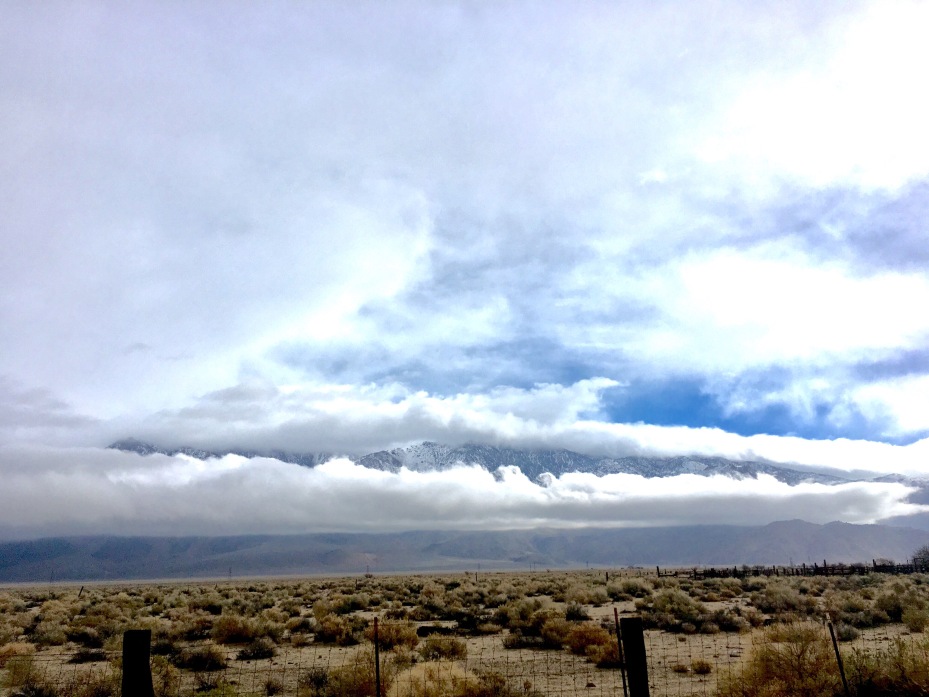 The Wall of Names. Over 10,000 interned at Manzanar

Offerings left on the tiers of the tower. Three quarters left at the front.

The Sierra Nevada Mountians at Manzanar

Below is the artwork of Michi Takemoto depicting life inside Manzanar. 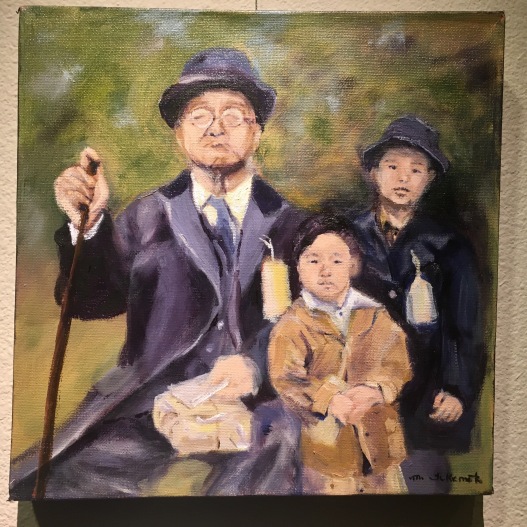 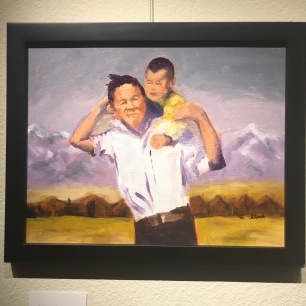 The Eastern View as we leave.

Information on Ansel Adam’s Manzanar Collection can be found here

Information on the Manzanar National Historic Site can be found here