The media company I am shooting for arranged press clearance for me to photograph the arrival of the President of the Untied States (POTUS) at the Minneapolis-St. Paul International Airport on June 1, 2012.

First off, I have to say that the first thing I had to adjust was my lingo: ‘the shoot.’  I shot the Lynx and the Twins on Opening Day, I shot Van Halen, I will be shooting Roger Waters on 6/3/12. The shoot, the right shot, shooting; all terms that are part of my lingo. And I own no guns. So I had to become conscience to use the term ‘photograph the President” and not “shoot the President”

When my editor called me on Weds. 5/30, we discussed which of the two venues would work best for photographing the President, his arrival at the airport or at the venue he would be speaking at. We both agreed the arrival of Air Force One and POTUS deplaning and greeting supporters on the tarmac would have more of a dramatic effect.

The event was closed to the public and I would need to be cleared through the White House Press Pool, which undoubtedly would require a background check. I came clean about my background to my editor and he said “Joe, I don’t think there are many photographers out there WITHOUT some sort of drug charge in their past” This put me at ease, somewhat.

I went thru the process of filing an expungement of my criminal record 6 years ago, but had never really put it to the test. Ten years ago, I could not even get simple employment due to my  drug possession/criminal background.

So I knew, if I was granted White House clearance, which is, obviously on the Federal level, than the expungement was indeed final.

The request was submitted on Weds. afternoon around 2pm, 22 hours ahead of the noon deadline on 6/31.

The morning of the 31st, I was angst because not only was I awaiting word to photograph POTUS, but the real test was if the background clearance would go through.

The deadline was at noon, I called my editor at 12:49 and asked: “Ok, so are we gonna call the White House and see if I was denied or are we just not follow up or what?” The other end of the phone just went silent for a few seconds, which seemed like minutes and then my editor said: ” Dude, it’s been 49 minutes past the deadline. Let’s give them some time., ok?” I laughed, realizing the anxiousness was all mine and said, meekly: “Oh, ok.’

Twenty -one minutes later I received an email from the White House Press Pool informing me that my name was on the list to photograph the arrival of POTUS. The email went on to detail the order of events of the day, what gate at the military base I would enter, and what was needed to gain access.

Now with all this in process, the request submitted to my editor and then to the White House, the prestige of the shoot; there was just one small detail. I didn’t have a camera to shoot with.

I had ordered my back-up camera, a new Nikon D90 on Tuesday 5/29, with two day delivery.

I went ahead and reserved a telephoto lens and a 2x convertor from my photo resource, West Photo in SE Minneapolis.

So the angst of being granted clearance had passed, but now it was replaced with if the camera would arrive in time.

With 9 minutes left in the delivery day, UPS showed with my new Nikon.

The morning of the shoot I went into a coffee shop to get a mocha and the twenty-something baristas were all in their customer service mode and one of them asked me “It’s going to be a beautiful day today, any big plans?” I laughed and said  “I am heading out to the airport to photograph the arrival of POTUS”

“Who’s that?” one barista asked and the other quipped “Must be a punk rock band”

I laughed and said, “No POTUS is the President of the United States” both barista’s eyes kind of widened and one of them said “That is the coolest” Laughing again, I said “Ya, it kinda is, huh?”

After getting the coffee, I made my way out to the airport and the Minneapolis-St. Paul Air Reserve Station.

At the gate I was given this pass for the dash of the car: 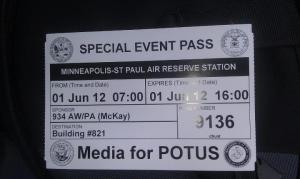 After passing thru the gate, I was escorted to a building within the base next to an area right off the tarmac. I placed my gear bag on the ground for the dogs to sniff for yet another round of security checks. I met with a Secret Service agent and he gave me my badge for the day:

I was then escorted into the lobby of the building where I went thru yet another security check of a hand held metal detector wand. I was then escorted out onto the tarmac to take position on the media platform. Every outlet was represented: StarTribune, St.Paul Pioneer Press, The Minnesota Daily, ABC, CBS, NBC, Fox, AP, UPI, and a couple of other local publications.

Since I was one of the last to arrive, I didn’t have a spot staked out, but this gave me freedom to move around the platform. There was about an hour and a half wait before the estimated arrival time. All of us just kind of mingled, some were working on stories; others, telling them. I found it humorous that I wasn’t the only one adjusting his verbage from “shooting the President” to ‘photographing the President.”

Various Minnesota dignitaries began to appear on the tarmac and the motorcade arrived and took position off to the side. 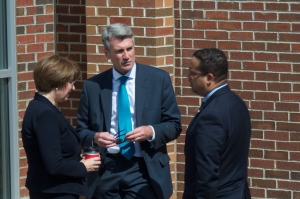 The time seemed to go fast, and in no time an announcement was made that “All activity on the tarmac was to cease and the airport was shut down” It was kinda wild to see the once busy airport with trucks and vehicles scurrying round and the roar of jets launching suddenly come silent and to a standstill.

A few minutes later, the Secret Service agent who escorted myself and the others to the platform came forward and said “Air Force One would be appearing over the tail of that airplane over there” as he pointed to the south-south east. We all turned and then, out of the clouds a jet appeared, as AF-1 began its descent into Minneapolis.

I had seen Air Fore One once before as it flew over me to land at Palm Springs Airport as I was riding my bike along Ramon Road in Palm Springs, in the mid 1990’s with Bill Clinton on board. The thing is massive and I stopped n my bike to marvel as it touched down at PSP International.

But this was different, as I knew it would taxi right in front of the platform I was standing on, and this time I was positioned to photograph the event.

AF-1 made its way along the tarmac and came to a stop in front of the building we were positioned in front of. The MN dignitaries made their way to the bottom of the stairs that were wheeled up to the door of AF-1. The door was opened and after a few minutes, President Obama appeared and made his way down the staircase and greeted the dignitaries. It would have been nice to hear what was said because when he got to Sen. AL Franken, whatever Franken said had Pres. Obama laughing quite hard.

After the greeting the MN dignitaries, the President made his way across the tarmac to the group of supporters who were next to the media platform. Most of the photographers went over to the side of the media platform to shoot down onto the event. This left me with a wide open space at the front of the platform, I sat down and placed my feet on the gate between the platform, tarmac and AF-1 and photographed POTUS from the side. 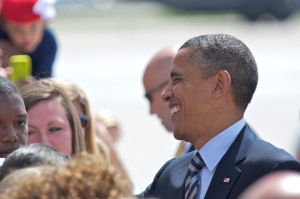 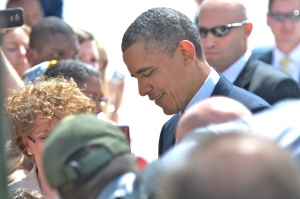 After meeting with the 30 or so people who had gathered, Pres. Obama waved to the crowd and made his way to the Presidential Limo, got in and the motorcade began to make its way across the tarmac to exit the airport. 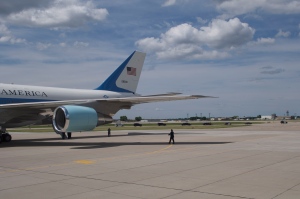 I had about a 3.5 hour lag until the second phase, so I left the shooting area, went off base and returned home to upload images to my editor.

I returned out to the base and the second time through went alittle quicker, but it was still the same. As I waited for the dogs to sniff my gear bag I took a call and during it I mentioned I was “out at the airport to shoot the President” when I hung up, a guy in plain clothes with a badge and gun on his belt came up to me and smiled and said
” You were talking about your with your camera right?”

I exclaimed “HOLY CRAP!!  Yes, sir, my apologies, I am here to take pictures of the President’s departure” He smiled and patted me on the back and took me to the metal detector and said “Lets check this guy out.” he smiled and winked at me as the military guard began to wave the metal detector over me. After everything was an all clear, I was escorted back to the media platform.

The media pool had dwindled some, so there was alittle more room to move around.

I had this taken while I waited on the media platform: 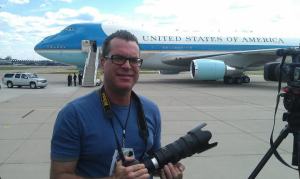 It was the same as earlier in the day, but in reverse. This time the announcement was made that the airport was shutting down. And then the head-lights of the motorcade appeared at the west side of the airport.

The motorcade made its way across the tarmac and around to the side of the AF-1. President Obama got out of his limo and made his way quickly up the stairs, and at the top, turned and waved to us on the media platform, then went inside of the plane.

It took another ten- fifteen minutes for the media pool traveling with the President to board AF-1. Once the door was closed the engines of AF-1 began to roar. As it taxied away from the media platform and turned onto the tarmac, I was almost blown over by the wind coming off the engines. It was the coolest. 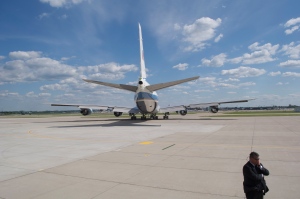 Feeling the thrust of AF-1’s engines

AF-1 made it’s way around the tarmac to the main east-west runway, then began to gain speed and it was wheels up and AF-1 lifted into the sky to the west and then banked to the south and eventually became a speck in the sky.

AF-1 airborne and heading off to Chicago.

This assignment certainly was unlike any other. And it was a lot of fun to do.

The full set of images from the event can be viewed here: 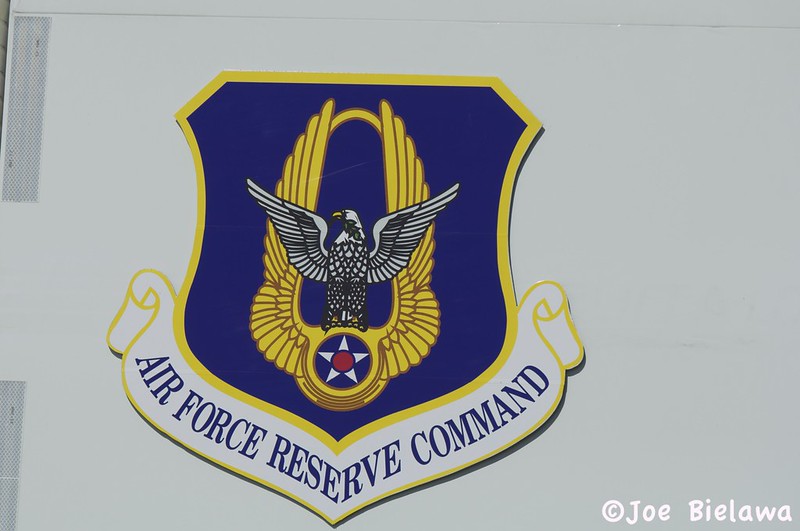