I have read much of his previous work, was amazed by his “RUNNING WITH SCISSORS”, but clearly identified with “DRY” and his experience with rehab. He went thru the same rehab facility as I, a couple of months ahead of me back in 1997. His description of his first night at the place was so spot on, it tripped me out. And I just love his writing style.

THIS IS HOW is probably the last self help book I will ever read, for it clearly has opened my eyes, but more importantly my mind, to so many things. I particularly liked his chapter on suicide versus ending your life and believe that ending ones life is, at times, crucial. Also his chapter on quitting drinking and his take on AA is so right on. It is what I have felt for a few years but didn’t articulate.

This book has helped strengthen my voice. 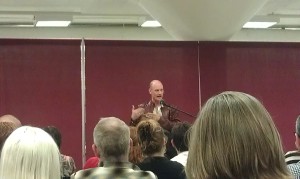 From the moment he took the stage, I was enthralled with all he said. He read some passages from his book and I was amazed that his reading of his own work was not at all how it was written. It was choppier, didn’t flow at times, but then at others it was smooth and just flowed.

Many times throughout his sharing I just burst out laughing. The guy’s sense of humor, his delivery but most of all, his mind is just amazing…and of course it is all of these things that I so enjoy about his writing.

After about an hour of his sharing and then a question and answer period; which was at times, incredibly enlightening with people questions or down right dreadful with their presumptuousness, he began to sign books.

I had about a 15 minute wait before I got to the table where he was signing.

When I got up to the table, I told him I went thru the same rehab as he a couple of months after him and he exclaimed ‘Oh GOD!” with a pronounced understanding that we shared a mutual hell. I laughed and ran my hand across his back and told him “You were so spot on with how you described that, especially with that damn Fuzzy Wuzzy. And then, your take on meetings in this ( as I pointed to the copy of THIS IS HOW he was signing) is exactly correct. You hit the nail right on the head. Thank you for writing this book.” He looked at me, gave a quick, small smile and said “Thank You” then we turned to the photographer who had my cell phone for this: