Last year alittle before the 4th, I discovered the Freedom from Pants Ride on Flickr and was kind of amazed that it was an actual organized ride here in Minneapolis. I usually ride my bike in a certain stage of undress (shirtless), but haven’t ridden pantless since my time in the desert of Southern California. I didn’t muster the bolas to participate last year, but set my sights on this year. I just wanted to enjoy the ride, so I left my Nikon at home and just brought along my little Olympus point and shoot.

THE MEET UP…..at 6:10pm it was 99 degrees, I head to the Soap Factory in SE Minneapolis. I arrived about 40 minutes before the 7pm start time and there were about 40 people gathered, almost all were in their underwear. I got off my bike, took off my shirt, and dropped trou and thought ” ok, I’ll just stand around here in my undies and wait for this thing to start” as I snapped my fingers and slapped my right fist into my left hand once….what do you when you’re nervous and have no pockets to burrow you hands into? or for that matter: NO PANTS!

Here are some pics of folks waiting around for the start: 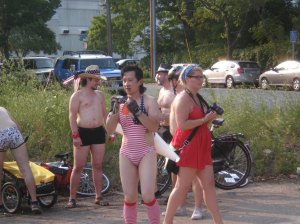 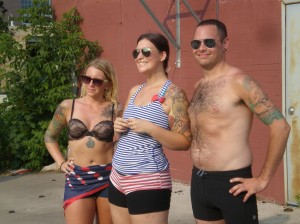 Everyone was real friendly, and I chatted with a few people. There were beers and drinks flowing, I had my water bottle for comfort/security. I mingled around getting to know people. For most, like me, it was their first ride and others had been doing the ride for the whole six years. I idled the time away introducing my self to the folks who were milling around me. One guy mentioned that the few people who where there clothed looked odd in comparison to everyone else who was in their underwear. I chuckled at this, because it was quite true

Here is what it looked like as the start time approached:

The call went out to mount up and everyone started to hoot, whoop and holler as we slowly made our way onto 2nd Street SE and towards the Stone Arch Bridge. As we passed Pillsbury Park, then across the Stone Arch Bridge people began cheering us on, others exclaiming ” What the HELL?” and kids would point and say “They’re in the UNDERWEAR!!” I was immediately at ease and knew I had found my tribe for the night.

As we passed the pavilion on the south side of the Stone Arch Bridge, the guy singing in the band that was playing said right in middle of the song,”oh, WOW! They’re all in their underwear”

When we got onto Washington Ave, we took up the entire northbound lane and we just kept moving, a parade of bikes, thru the red light as individual units of the parade would stop/block traffic and let us thru the intersection.

With the 300+ riders, the entourage lasted easily 6 or eight blocks long, just a mass of bikes with scantily dressed riders moving thru the city.

As we went along Nicollet Mall, the older folks would scowl at us, but for the most part people where cheering and taking pictures. A guy opened his pants, and flashed his underwear. Women would lift their shirts and flash their bras. Punks would run out in the street and slap some ass.

When we would see other bikers not in our entourage we would yell “take off your pants and join us!!” Most would say “thanks no” others would hesitate, then get off their bikes, pull their clothes off and join us in their underwear.

As whole we began to chant “NO MORE PANTS! NO MORE PANTS” when that died down individual chants would go out. Mine was like a beer seller shouting his wares at a ballpark in a deep bellowing: “FREEEDOOOOOM FROOOM PAAAAANTS!” Others were shouting “take off your pants” or “you can take my pants, but you can’t take my freedom”

The mood was so jovial, upbeat and fun..it was just a riot to be part of this mass of moving exhibitionism.

Here is a shot looking back down Nicollet as we stopped at Franklin Ave and the bikes go for blocks:

As I had to learn the hard way in the past: drunkenness and biking are NOT a good mix. There were some wipe outs, it was inevitable with so many people on bikes, a few liquored up and most not paying that close attention. I almost collided with a couple of different bikes as I was checking out the “scenery” and not watching who was close by until tires rubbed or bikes clanked.

THE FIRST REST STOP occurred at Stevens Square Park. Just by biking at slow pace, I kept to the front of the pack and it was cool to see throngs (thongs??) of people come biking into the park, dismounting and hanging around. Just a sea of people in their undies, outside in a park, just as natural as can be.

Here are some shots of the First Stop: 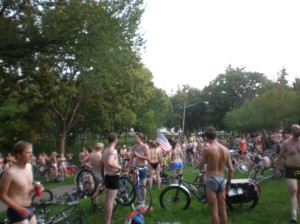 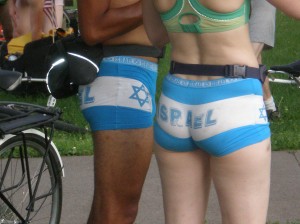 Everyone jut started milling around, a couple of the riders, one on a Surly Big Dummy and another with a trailer had tunes blaring. Some started to gyrate to the music; a couple of guys with super soaker squirt guns began to move in circles around people, soaking them. I got hit dead center in the chest, then smack in the ass. Girls where doing yoga, and handstands, a guy and a girl where competing in some sort of yoga stance, smokes where burned, beers were cracked.

I chatted with another dude who had a decent DSLR with him…and I could see now there were a few other cameras around. We talked “shop” for awhile. I thought ‘I should have brought biz cards’, then realized pulling a card out of my underwear to give to someone probably wasn’t the best move. I surrendered and remembered I was just here to enjoy the ride.

The call to mount up and “pick up your shit” (trash) was yelled. And the mass of near-naked people made their way out of the Park, through the city towards Lake Calhoun. We again took up the entire lane of traffic or the entire street if it was a one way, chanting “NO MORE PANTS” whooping and hollering as we rode. People still cheered us on, most had the cell phones going filming the undie hooliganism. And only in Minnesota, cars were pulling off to the side to let us pass. LA, Chicago or NYC, I doubt they would have stopped traffic for a bunch of freaks in their undies riding bikes…

As we approached Lagoon and East Calhoun Parkway, there were two Minneapolis Bike Cops on the street at the corner waiting for the light to change. The bike mass stopped at the red and we all began to point and chant at the cops “NO MORE PANTS!! NO MORE PANTS!!” The cops just laughed and shook their heads. One pulled out his cell phone and started filming as we continued to chant. The other cop mouthed “No Way” as his smiled and continued to shake his head.

We got to the Lake Calhoun Beach as the sun was setting. People dismounted and things got a little “jiggly” as some women and men stripped down and went skinny-dipping. I wasn’t quite really to let it all hang out…not on this first ride, anyway.

Although they’re kind of dark, here are a couple of shots from he Calhoun Stop:

After a few minutes of swimming, there was a call for the group photo. We all gathered on the beach and the photogs climbed up on the life guard station for the shot.

A 20 something couple were standing close by watching and the guy says
“I wanna be in this picture, but I can’t.”
I said “why not?’
He replied “duh” and tugged on his shorts.
I said “well, take ’em off”
“ok” he said and kicked off his shoes and pulled off his shorts. His girlfriend looked at me and said kinda snappy “Thanks alot” I laughed and said “Well, it didn’t take much” and she smiled at me.

After the the group photo, the ringleader made the call to mount up and to “don’t leave shit” meaning again the trash. A dude close to me got a puzzled look on his face and asked me “Did he just say don’t eat shit?!?” I roared with laughter and said ‘no, man he said don’t LEAVE shit’ The guy laughed and said “I couldn’t figure why he would tell me not to eat shit, I mean you know.”

We mounted up and began to make our way over to Powderhorn Park to watch fireworks. Some of the jiggly continued as a few female rides didn’t put their bras back on and two male riders began the trek naked…except one had a baseball cap on so, you know, he wasn’t TOTALLY naked.

We made our way through Uptown, along Lake Street to Lyndale, down Lyndale to 32nd, then onto Powderhorn Park. I was standing up on my pedals at one intersection and a group of guys in a yard where hollering at us. I yelled at them to drop trou and one yelled back ” Nice panties Bro! Way to represent” I yelled “they’re not panties” and he said ‘oh, sorry, manties then’ I laughed, he gave me thumbs up, I flashed a Peace sign at him.

Again, I am at the front of the pack as we descend down the hill into Powderhorn Park and it is just the coolest thing to see all these bikes with lights just keep coming over the hill into the Park. By now it is some what dark and as people realize there are about 300 folks in the park in their underwear, some move away…others move closer.

We congregate en mass in the middle of the park. A couple of bikers have some sort of smoke bomb/stick and are circling the pack dousing us with smoke to keep the bugs away. As was with each stop, but now that we are at the “destination” the party relly starts. Suddenly one of the bikes with the music lights up with xmas lights and a disco ball perched high above it illuminated by an LED head light. Little stars seem to dance in circular motion on the ground. A crowd gathers around the xmas tree light-bike-disco ball and it gets funky!

The fireworks are going off all over the park. The main event of the fire works start to boom and end, but this bike party just keeps going. People are doing beer bongs, bottles are being passed. I am in the crowd of underwear dancers enjoying my water, trying to do my best white boy boogie.

CURSES TO THE WORKDAY….I have to go to work in the morning and after my night before at the Ziggy Marley concert, I need call it a night and head home. But I don’t want to…I want to be the carefree one of yesteryear and just stay out until who knows when and go home with who knows who. But…

I put my pants on and start the ride back home, and as I do, I think, yep a new Fourth of July tradition has started tonight. What will I wear next year?

Here is a link to the route recorded by my Garmin:
http://connect.garmin.com/activity/196146595